What is Caribbean Indigeneity? I considered classifying this project as Pre-Columbian Indigenous Caribbean Peoples but seemed too restrictive. It also perpetuates the notion that these Indigenous peoples live strictly in the past. I thought it’d be more interesting and a fuller picture if I gathered a wider perspective on what Caribbean Indigeneity or Indigeneity in the Caribbean might mean in different contexts. Shona Jackson’s groundbreaking text Creole Indigeneity: Between Myth and Nation is on a topic that is not my central interest but certainly deeply related. Jackson looks at the treatment of indigeneity as a category of belonging and to how the those referred to as “Amerindians” in Guyana are dispossessed in postcolonial nationhood. (I include a couple sources about Guyana specifically below.) But what Jackson also compels me to consider is the ways in which Indigeneity is a contested identity in the Caribbean and the histories of migration, diaspora, dispossession that have occurred there for hundreds of years provoke. Another perspective is present in the recent collection on the work of Sylvia Wynter, Being Human as Praxis, authors take up the question of whether African-descended peoples can be considered “Native” to the Caribbean while considering marronage to processes of “indigenization.” With this plurality of views in mind, this resource page then is an attempt to trace the contours of several ongoing discussions and identity formations around the Indigenous Caribbean. 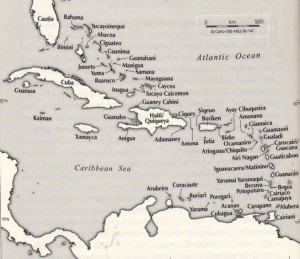