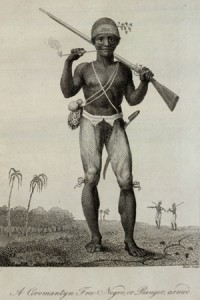 The Caribbean is a diverse space, with a long history of many populations— native, European colonizers, imported slaves and indentured servants— which have not only cohabitated, but at times oppressed, been oppressed and fought against this oppression. As such there is a long history in the Caribbean of rebellion and revolution as people sought to improve their lives in the face of cruel and repressive practices. There are many heroes in these stories— Toussaint L’Ouverture, Carlota— but there are also many names who will remain unremembered, perhaps only now to be found as a mention in a letter, or in the description of a repressed rebellion.

Antigua’s Disputed Slave Conspiracy of 1736
Explores the veracity of claims concerning a plot by slaves to violently overthrow white rule on Antigua. Provides a good amount of information concerning slavery on Antigua.

The Maroons of Jamaica
Considers the Maroon population of Jamaica (escaped slaves) and the struggles between them and the Jamaican government, including the First Maroon War, begun in 1728.

Slave Revolt in Jamaica, 1760-1761
Presents a interactive map and timeline of the Jamaican slave revolt, with  accompanying first person descriptions of the events.

The Black Carib Wars: Freedom, Survival, and the Making of the Garifuna
Book by Christopher Taylor which details the Carib Wars. In depth presentation of history and causes. Requires JSTOR.

History of the Haitian Independence Struggle, 1791-1804
Digital archive which presents a number of texts related to the Haitian Revolution. Includes the Toussaint L’Ouverture Archive which contains a good deal of materials written by Louverture, including his autobiography.

The Louverture Project
Expansive Wiki resource for understanding the Haitian Revolution, as well as other revolutions which have occurred on Haiti. Includes bibliographies, a timeline, maps and images.

Slavery and the Haitian Revolution
Resource for information on the French Revolution, this section in particular gives an overview of the Haitian revolution and its relationship with France.

Slave Resistance Studies and the Saint Domingue Slave Revolt: Some Preliminary Considerations
Article by David Geggus which considers some of the ideas and concepts
generated by studies of slave resistance within the context of the Haitian Revolution.

AfroCubaWeb
Website describes Carlota, a female slave, who led the 1843 slave uprising in Cuba. This site seeks to help rectify an absence of discussion around Carlota.

Race, Class, and Resistance: The 1858 Riots and the Aftermath of Emancipation in Antigua
Article by Natasha Lightfoot which considers black working-class people’s social protest in Antigua during the post-emancipation period, specifically a five-day riot that began in 1858 among dockworkers but by its end involved all manner of working people in an insurgency against local authorities.

Caribbean Studies: Archival Resources
NYU research resource on the Caribbean. Of particular interest here are a wide number of links related to Cuba, including photo archives.

Cuban Archive
Mixes photography with text in order to the tell the long history of Cuba, including the Cuban Revolution. Much of the material appears to be derived from Cuban diasporic community.

Yale University Manuscripts & Archives Digital Database, Cuban Revolution Collection
Presents a good number of photos which provide documentation of the 26th of July Movement from 1957 to 1959, and of Fidel Castro during his first year as prime minister. . Includes a guide detailing the archive’s creation.

The Caribbean in Transition
Presents a brief overview of various Caribbean revolutions during the 20th Century. Presents an insightful look at various political influences in the Caribbean during this time.

Digital Library of the Caribbean
This surprisingly searchable archive reveals a good amount of information provided it’s fed the right terms. For instance a search for “revolution” returns An Inquiry into the causes of the Insurrection of the Begroes in the Island of St. Domingo. The collection dates as far back as 1564.

Caribbean Histories Revealed
The National Archives’ archive of its Caribbean holdings, with particular attention paid to slavery and nationhood. Includes letters and maps, as well as reports on revolutions and rebellions.

Slave Rebellion
Presents a timeline of Slave uprisings across the Caribbean throughout the islands from 1735 to 1835, with a description of each event.

Chronology of Resistance in the West Indies
Covers 1638-1837, and includes island name, number of slaves involved and a brief description, including names of those involved or name of rebellion.

Recovered Histories
Searchable digital archive which gives an insight into the history of enslavement and those who fought to maintain and abolish it. Includes digitized pamphlets.