This page contains links to content which focuses on religious traditions that, though indigenous to the Caribbean, are heavily influenced by African ancestry. They are also some Points of Interest (P.O.I’s) along the way. Welcome!

And so, we start from what I call “the top”. The Afro-religions that exist in the Diasporic communities in the Caribbean are derivatives of the Yoruba Faith. Yoruba is not only a traditional religion but it is also a people and a language. A large percent of the Africans who were stolen from West Africa and sold into slavery in the Caribbean were Yoruba. This is a simple but comprehensive description coming out of Howard University that gives some insight into the Yoruba of West Africa and their religious influence in the Caribbean. 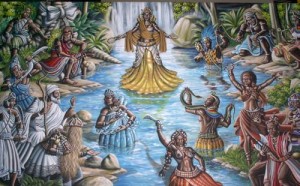 For further clarification, check out this YouTube video in which Falokun Fasegun describes some of the Yoruba Orishas.

Point of Interest (P.O.I) 1: A photographer’s artistic representation of the Yoruba gods, referred to as Orisha. 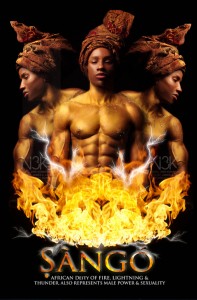 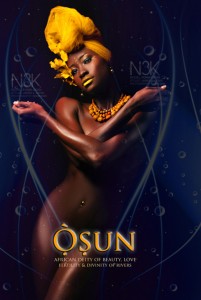 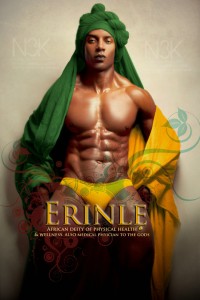 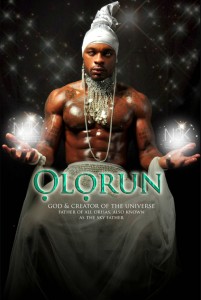 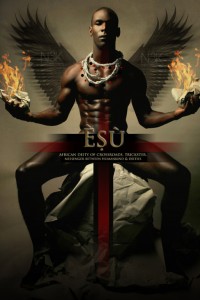 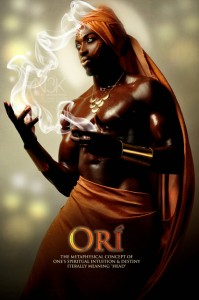 Let’s take a closer look at the symbolism and powers of the main Yoruba deities that form the core pantheon across all Westernized forms of the Yoruba religious tradition (i.e. Orisha, Santeria, Pocomania etc.). We begin with the deity who in all ceremonies and other occasions is called upon and honored first, Eshu – The Divine Messenger and Trickster. 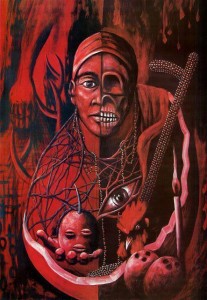 For each deity, there are songs followers sing in prayer to and exultation of said deity. These songs too are remnant versions of those that were originally sung in Yoruba Land (Africa). Listen to a sample of the songs sung for Eshu. The first from the Cuban Lucumi religion and the second from the Trinidad and Tobago Orisha religion.

Like songs, there also special symbolic tools (called implements) used to represent  each Orisha’s character and powers. These tools are used (or mimicked when not available) when dancing for the Orisha and laid upon shrines created for each god, along with offerings of the god’s favorite commodities. Eshu carries a club or staff and one of his favorite things to drink is rum. 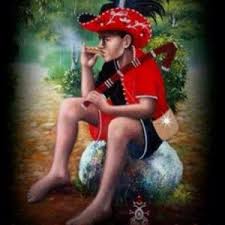 Here’s an example of a shrine created for Eshu. See that both the club and rum are on it. It also includes other Eshu implements like the cowrie shells and has the colors associated with Eshu which are red and black. 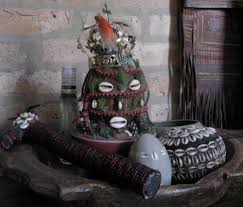 P.O.I 2: One way to make an offering to Eshu is to go to a major cross road in the middle of the night and through some pennies (usually copper) into the crossroad. People might look at you crazy but this is what needs to be done sometimes to appease the god.

In a religious ceremony after Eshu is sung to and given all that is necessary to appease him, he is ushered out of the space to a spot outside specially designated for him to live. Leaving Eshu inside the space of the ceremony could be risky. Remember he is a trickster. After honoring Eshu, it’s time to honor the god of iron, the clearer of the pathway, the warrior-essential, Ogun.

There is a very well known Orisha high priestess and entertainer who has taken Orisha music worldwide. Her name is Ella Andall and she has put out albums dedicated to the different Orishas. Here is  a sample from her album honoring Ogun.

P.O.I 3: Let’s take it back to the root for just a minute: An Ogun ceremony in Benin City, Nigeria, where a man dances Ogun.

One of the more popular Orishas, Ogun’s implement is a machete, in some places two machetes. When he “comes down” (i.e possesses) on a follower, the person moves swiftly and violently like a warrior should. 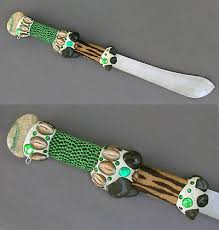 A shrine set up for Ogun is all iron. It looks a bit like this. He enjoys offerings like cigars, plantains, smoked fish, jutía, pomegranates, grapes, watermelons, cigars, rum, gin, bananas, he-goat, rooster, and pigeons … Let’s just say he’s a warrior with a huge appetite. 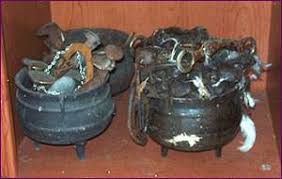 Ogun had a lover who was equally as fierce a warrior as he. Her name is Oya.

Oya, Olla, Oya Yansa, Yansa, Yansan are all names by which this powerful goddess is known. Syncretized as Saint Theresa in the Catholic faith, she is one of the most feared and misunderstood Orishas. A woman in form, she possesses many masculine attributes: a consummate, weapon toting warrior who, it is said, grows a beard in time of war. Oya is also the owner of the market place, has authority over the cemetery and controls the winds. If you want the winds of change to blow through your current situation, turn to Oya.

Watch as these daughters of Oya dance in honor of their mother. Notice  their fast movements, their tornado-like turns, their piercing screams, their intense stares.

Though Yoruba gods are known to have more than one implement, Oya’s popular four are seen all the time, unlike the other tools of the other gods. They are the machete, mask, scythe and horsetail fly-whisk (iruke). 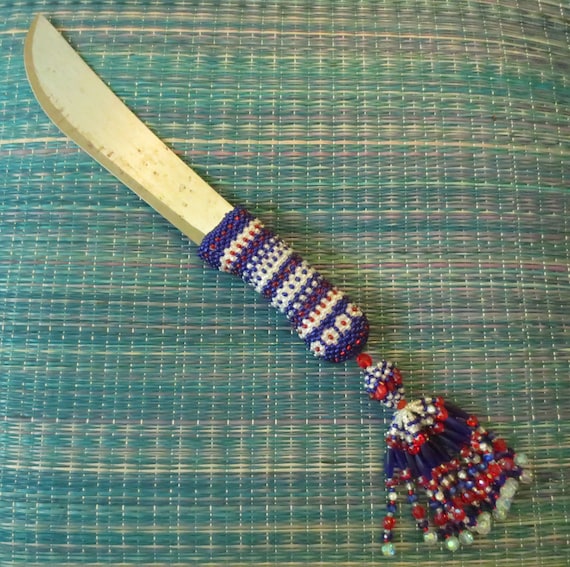 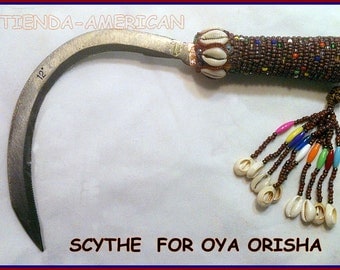 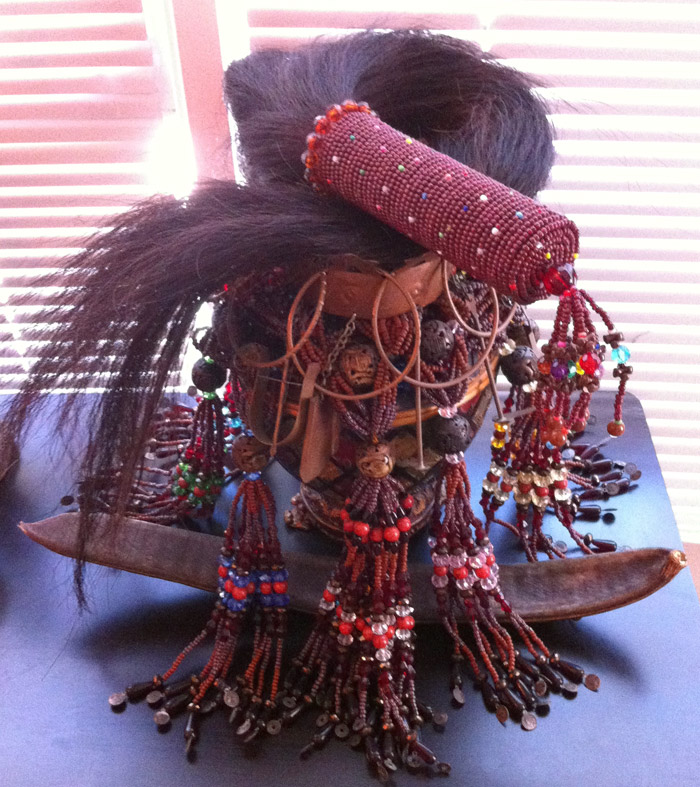 You would usually see all these implements adorning Oya’s shrine in addition to sweet and dark colored foods.

And so we return to a point raised earlier about Ogun losing Oya to another Yoruba god. Who else could he be but the handsome and macho god of lightening and thunder, Shango. In many of the Afro-Caribbean religions, Shango is regarded as king. He is by far the most popular Yoruba god in the diasporic community; so much so that in Trinidad and Tobago the Orisha religion is known as Shango Baptist.

P.O.I 4: Listen to the “Matriarch of Black Dance”, famed choreographer and dancer Katherine Dunham speak about her experience with Shango. Revered as the Yoruba deity of dance and drumming, people sing and dance Shango in performance more often than they do for other deities.

Drums for Shango sound a bit like this. And in the Cuban Lucumi this is how they dance for Shango. 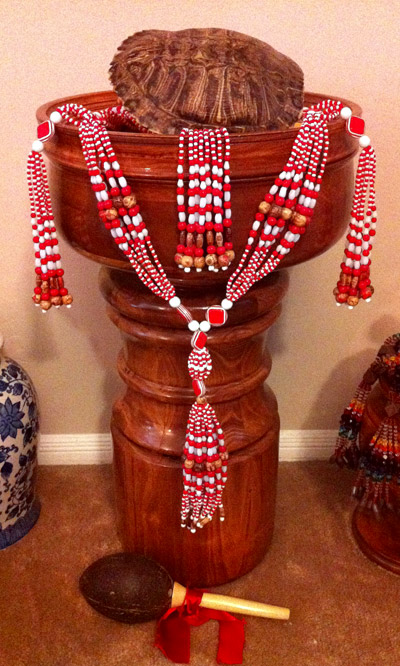 Shango carries a double headed ax (his implement)  and is known for riding in on a horse like a knight in shining armor. For a man so big and powerful he must like good food. Shango has quite an appetite and enjoys all kinds of hearty foods fit for a king. He loves dry white wine, cornmeal porridge with okra, bananas, mangos, ram, rooster, quail, and guinea hen. His colors are red and white and so shrines for Shango are decked in these colors.

For the kind of man Shango is, it is expected that he would have more than one lover. Before Oya came into Shango’s life, there was Oshun, the mother of his twin children, Ibeji. Affectionately referred to as Mama Oshun, Oshun is the epitome of femininity.

P.O.I 5: Some Orishas are so important to their followers that they (the followers) put on festivals to honor them (the Orishas). One such festival is the Oshun festival. Take a look at two versions of festivals celebrating Mama Oshun; one in Trinidad and Tobago and the other is the home of Yoruba, Nigeria.

Like Oshun, the songs sung in praise to her are sweet and soothing. A shrine made for Oshun will contain sweet things: flowers, perfumes, honey, fruits and more. 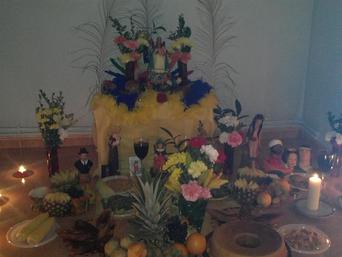 Although Oshun is the deity of the fresh waters, the title of queen of all waters belongs to her “sister”, Yemoja. Her name is a contraction of Yey Omo Eja, which means “Mother Whose Children are the Fish” and so it is believed that she is the mother of all things and rules over motherhood.

Yemoja’s implements are things which can be found in the sea: oars, ship’s steering wheel, anchor. She also carries a machete, like Ogun and Oya, in times of war. On her shrine, you can find a lot of sea shells.

Now that you have a fairer idea of the root of  Afro-Caribbean religions, let’s take a closer look at each of them starting with the English-speaking Caribbean. There is the Orisha/Shango Baptist in Trinidad and Tobago and Pocomania in Jamaiaca. 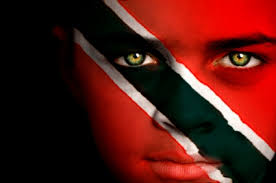 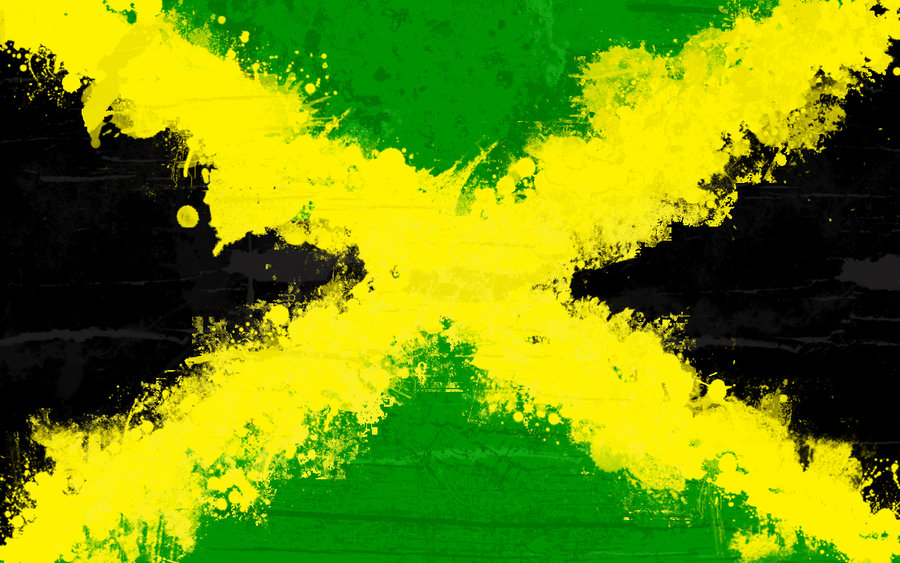 P.O.I 6: Two writers give accounts of their experience in an Orisha ceremony and Pocomania ceremony respectively.

Take a look inside an Orisha feast.

Of the countries in the Spanish-speaking Caribbean, Cuba has been the one most noted for having a strong African influence on its religious traditions. Santeria has become a recognizable religious tradition across the world, as many practitioners immigrated from Cuba to the U.S, Canada and Europe, taking the religion with them. People would quicker recognize the word Santeria than they would Orisha or Pocomania.

Here are some very telling images of Santeria followers practicing their religion. 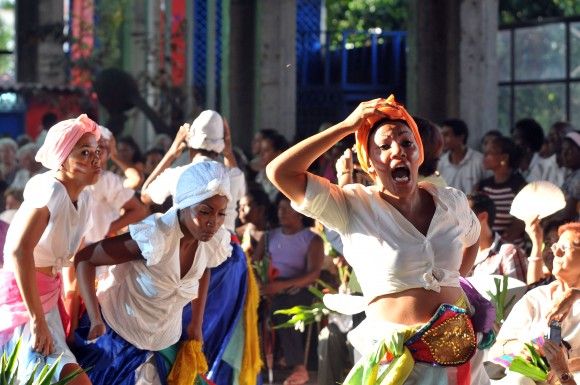 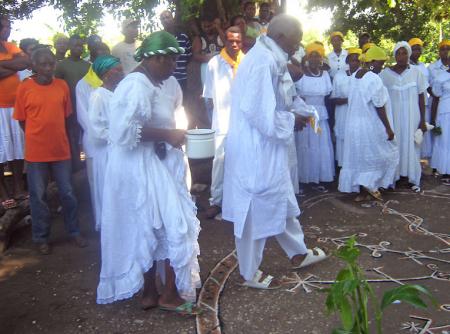 There are other Spanish-speaking countries like Colombia, Venezuela, Uruguay and Argentina where a similar Yoruba based religion is practiced, however it is not called Santeria. In these places, it is called Candomble which is primarily practiced in Brazil.

Listen to this young Brazilian speak about his involvement in Candomble and how this ancient religion is being practiced today.

Those Afro-Caribbean religions mentioned thus far are all quite similar to each other and follow almost exactly the beliefs, structure and practices of the mother religion, Yoruba. The deities are the same across the board and the way rituals are done is about the same too. There is one religion we haven’t yet touched on that, like the others, is a derivative of African religious traditions but has an entirely different structure from those mentioned above. This religion is Haitian Vodou.

Haitian Vodou is no doubt the most feared of the Afro-Caribbean religions mentioned. This is partly due to the commercialization of the tradition by the entertainment industry, which has imposed characteristics like mysterious and evil unto it. Here’s a documentary that gives some insight on Haitian Vodou from a more accurate perspective.